Difference between revisions of "BBC Records"

The British Broadcasting Corporation (BBC) is a vast organisation, with a hundreds of departments each handling a multitude of tasks and functions, from production to administration. The BBC's commercial wing was BBC Enterprises Limited (renamed BBC Worldwide in 1995).

For the sake of simplicity, whenever we refer to the BBC within the pages of BroaDWcast, we are generally referring to BBC Enterprises, as they were the ones responsible for selling Doctor Who to overseas countries.

And, whenever we refer to BBC Records, it is to be understood that we are referring to the BBC documentation and other paperwork relating to foreign sales of Doctor Who that has been researched by others, and openly made available in the following publications: 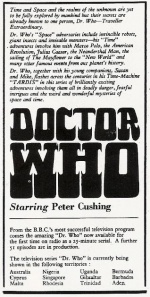 In 1966, Stanmark Productions Ltd attempted to produce a series of radio serials based on Doctor Who to star Peter Cushing as the Doctor. A promotional brochure was produced, and in this document, it stated: "the television series "Dr Who" is currently being shown in the following territories: Australia, Cyprus, Malta, Nigeria, Singapore, Rhodesia, Uganda, Gibraltar, Trinidad, Bermuda, Barbados, Aden."

Missing from the list is Hong Kong, Jamaica, Zambia, all of which were screening the series in 1966; Kenya was to commence broadcasts in June 1966. New Zealand and Canada had also screened Doctor Who but had finished its first run by 1966.

The Making of Doctor Who 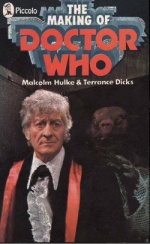 Written by Malcolm Hulke and Terrance Dicks, published in April 1972 by Pan Books Ltd / Piccolo Books. On page 8 there is this comment:

It appears that the inclusion of Uruguay is an error, as we have found not any evidence of Doctor Who screening in that country, either prior to or after 1972. We wonder perhaps Uruguay was mistaken for Uganda, which is missing from the list.

Doctor Who - The Sixties

Written by David J Howe, Mark Stammers and Stephen James Walker, published in 1992 by Doctor Who Books / Virgin Publishing Ltd. On page 155 is a small side bar SALES OF THE DOCTOR: ... the third story Inside the Spaceship had been sold to the following countries by the end of the sixties: Canada, Malta, Singapore, Bermuda, Nigeria, Gibraltar, Aden, Trinidad, Rhodesia, Cyprus, Barbados, Hong Kong, Ghana, Jamaica, Zambia, Kenya, Thailand, Sierra Leone, Tunisia, Morocco – including all Middle East, and Arabic countries – and Far East and South East".

Missing from the list are: Chile, Dominican Republic, Ethiopia, Mauritius, Mexico, Uganda, Venezuela, which heightens the fact that much of the BBC’s record-keeping can be incomplete or contradictory!

Doctor Who - The Seventies 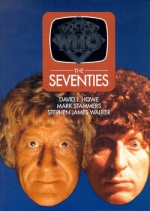 Written by David J Howe, Mark Stammers and Stephen James Walker, published in 1994 by Doctor Who Books / Virgin Publishing Ltd. On page 175 there is a table of countries to which Doctor Who had been sold, as noted on an eternal BBC memo dated 28 February 1977:

The inclusion of Arabia and Caribbean, which are regions rather than countries, appear to be for sales made to Aden and Barbados.

The memo in question covers all stories from An Unearthly Child up to and including The Seeds of Doom. Whoever compiled the list at the BBC made a few errors along the way, such as including New Zealand under four stories it didn’t purchase, and omitting it from three that it did (the correct total for New Zealand should therefore be 39 rather than the cited 40). Other errors in some of the totals have come about because some countries are listed twice under the same story heading, resulting in an inflated total for that country.

Most of the errors in this table were corrected for the list of stories and countries that appeared in The Handbook (see below).

The accuracy and relevance of these totals are explored on the profile page of the countries in question.

Doctor Who - The Eighties 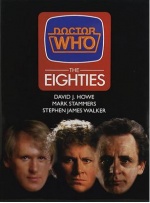 Written by David J Howe, Mark Stammers and Stephen James Walker, published in 1996 by Doctor Who Books / Virgin Publishing Ltd. Due to space restrictions, quite a chunk of text was removed.

This cut material included an updated list of OVERSEAS SALES:

Doctor Who continued to be sold abroad and in the eighties it was one of the BBC's most popular exported programmes. It was very popular indeed in the American market with numerous Public Broadcast Stations buying the rights to screen it from the BBC's American distributor, Lionheart Television International Inc.

By February 1987, Doctor Who had been sold to and screened in the following countries. This list was produced internally by the BBC and it is not known from what date the sales were detailed. It would appear not to include the sales detailed in the previous book in this series: Doctor Who: The Seventies. The number following the country name indicates how many individual stories were bought by that country:

This 10 February 1987 memo names a number of countries not previously noted in any previous documentation. Presumably the memo includes sales of all stories up to and including the 1986 serial The Trial of a Time Lord.

The list names Dominica, which is most likely Dominican Republic, and also lists Rhodesia and Zimbabwe separately, despite them being the same country.

The authors confess that it is not known from what date the sales were detailed, or whether it includes the sales noted in The Seventies. However after a close analysis of this list and the 1977 memo, it is clear that there is some degree of overlap across the two.

The US total 118 provides the best clue, as it must be made up of the original run of 13 Jon Pertwee stories (per the 1977 list), plus 41 Tom Baker stories, 20 Peter Davison, 11 Colin Baker, plus back catalogue sales of the 17 complete Hartnells, the five complete Troughtons, plus the remaining 11 Pertwees.

Therefore, the conclusion we can draw from this is that the 1987 list mainly records the sales of stories that were made in colour – Pertwee, both Bakers and Davison stories, with the additional sales of the surviving full Hartnells and/or Troughtons serials that were sold to Australia, New Zealand, Canada and the United States after 1985. Applying this notion to those countries that appear in both lists, and factoring in the stories of those Doctors that did screen, the formula is very sound.

Of the countries that appear in both the 1977 and 1987 lists, only the following have overlap across both: Australia, Brunei, Canada, Dubai, Gibraltar, Hong Kong, Holland, New Zealand, Philippines and the United States.

The accuracy and relevance of these totals are explored on the profile page of each recorded country.

Doctor Who - The Handbook 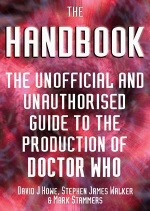 Written by David J Howe, Mark Stammers and Stephen James Walker, published in 2005 by Howe and Walker's own small-print company, Telos Publishing Limited (TELOS), and based on material previously featured in the series of seven Doctor Who The Handbooks (one for each Doctor) by Doctor Who Books / Virgin Publishing Ltd, between 1992 and 1998.

Both listings have been compiled from the same 28 February 1977 memo that they had referenced in The Seventies. The authors seem to have taken the opportunity to correct some of the minor errors that had crept into the bracketed tallies that appeared The Seventies, so as far as the Hartnells and Troughtons sales are concerned, The Handbook can be read in preference to The Seventies. (While they have removed most of the duplications, Mexico is still listed twice under the Planet of Giants.)

The sales data presented in The Handbook, however, does not include the Jon Pertwee or Tom Baker sales that were identified in the 1977 memo.

The accuracy and relevance of these totals are explored on the profile page of the countries in question.

Between October 1991 and May 2003 (issues 180 to 331), DWM published a series of Archives, each an in-depth story analysis, researched and written by Andrew Pixley. These Archives (and the Archive Updates that featured in The Complete First Doctor, Complete Second Doctor, etc, series of specials published between 2001 and 2003) listed the then-known countries to which each serial was sold, such as the example shown here for Robot.

Much of this sales information was extracted from the same documentation mentioned above, such as the 1977 memo that featured in The Seventies and The Handbook. Another significant reference source was a document from 1979 that identified some of the countries from which a rights fee had been payable for clearing the use of incidental music.

Other countries named as having bought Doctor Who that were revealed in the pages of DWM are Germany and Turkey.

Nothing at the End of the Lane (NATEOTL) 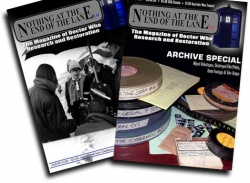 Nothing at the... Volumes One and Two

A superb factual magazine exploring the world of film archives, video reconstructions, script drafts, "Wiped Videotapes, Destroyed Film Prints, 8mmm Footage and Tele-Snaps", written and researched by primarily by Richard Bignell, Richard Molesworth, Andrew Pixley, and others. Much of the material featured has been drawn from extant BBC documentation and paperwork.

Two issues have so far been produced – the first in July 1999 and the second in June 2005. A third is currently in preparation. (Visit their site at NATEOTL.)

Written by Richard Molesworth, published in 2010 by Telos Publishing Ltd. This is the story of how missing episodes of Doctor Who came to be 'lost', and the valiant efforts of those responsible for recovering missing episodes. The book also contains summaries of foreign airdates, which have been derived from material presented here in BroaDWcast (with our blessing).

The book also draws upon Molesworth's previously published exposés into the secrets of the BBC's archives, specifically his three-part article in DWM (issues 255-257, July-September 1997). This was itself based in part on Molesworth's articles previously featured in the fanzine DWB (issue 77, May 1990), and the DWB Compendium (1993).

Other countries that screened Doctor Who have been identified from other publications, books and magazines, such as: DWB, Celestial Toyroom and other Doctor Who Appreciation Society publications, such as the souvenir booklet issued at the 2003 Panopticon Convention (pictured).