Difference between revisions of "Argentina"

ARGENTINA is the southern-most country of the South American continent. It shares a border with Bolivia, Chile, Paraguay Uruguay and Brazil.

Argentina began its television service in 1951.

Unlike the majority of the other South American countries, the station adopted the PAL colour system (experiments with NTSC were abandoned in 1969). 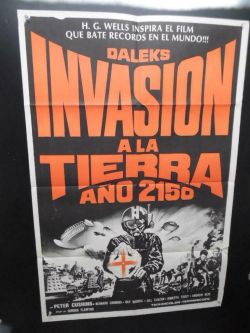 DOCTOR WHO IN ARGENTINA

The second of the two Peter Cushing Dalek movies was shown in theatres in Argentina (presumably in the late 1960s) under the title "Daleks Invasion a la Tierra Ano 2150AD".

The 1996 TV Movie was available in Argentina via three different methods: 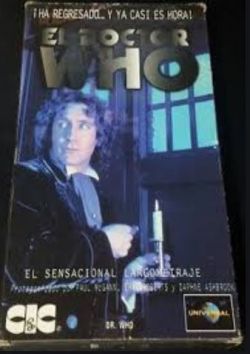 The TV Movie was available as (possibly a Rental Only?) VHS tape from MCA/Universal/CIC Video in late 1996.

The Spanish subtitled tape - with the cover title EL DOCTOR WHO - had the tagline "¡HA REGRESADO… Y YA CASI ES HORA!" (He is Back… And It's Almost Time!)

The movie apparently aired on TV (presumably on ATA) in early 1997, at least prior to June, but we have not been able to verify this.

The 1996 film was available again from February 1999 via the HBO OLE cable station.

Also available on cable was a run of Tom Baker stories: these were shown on the Argentinian-based cable station Uniseries during 2002 - see that separate profile page for more details.