From BroaDWcast
(Redirected from Zimbabwe)
Jump to navigationJump to search

This country, located in south east Africa, was known as RHODESIA until 1 June 1979 when it was renamed ZIMBABWE RHODESIA. Previously a British colony, it achieved independence in 17 April 1980, when it was renamed just ZIMBABWE. It was a member of the British Commonwealth until 2003. It shares a border with Zambia.

There is just one television station: Rhodesian Broadcasting Corporation (as it was called at the time), a government-owned commercial broadcaster.

Colour transmissions began in 1984 using the PAL colour broadcast system. Therefore, all Doctor Who episodes that aired were broadcast in black and white.

The 1979 and 1980 screenings in Zimbabwe are therefore the only known instance in the broadcast history of Doctor Who in which Tom Baker stories were transmitted at source in black and white.

The principal language of Rhodesia / Zimbabwe is English.

DOCTOR WHO IN RHODESIA / ZIMBABWE

Rhodesia / Zimbabwe was the ninth country to screen Doctor Who (see Selling Doctor Who). It was the second in Africa.

The Stanmark Productions Ltd advertisement from 1966, identifies Rhodesia as one of sixteen countries screening Doctor Who by January 1966.

Rhodesia is named in the list of 27 countries in The Making of Doctor Who (1972 Piccolo edition).

In DWM, Rhodesia / Zimbabwe is identified in the Archives of the same 11 stories.

The Eighties - THE LOST CHAPTERS records a sale (by 10 February 1987) of "(4)" stories to Rhodesia and "(4)" to Zimbabwe. There are two ways of interpreting this: there were eight stories, but sold as two separate batches of four, each either side of when the country changed its name in 1979/1980; or the record means 4 total to "Rhodesia / Zimbabwe". The fact there are two clear screening batches, one of five stories, the other of (potentially) three, does support it being the former; a total of eight.

Rhodesia therefore bought the standard package of stories from GROUPs A, B and C of the William Hartnell stories.

It's worth noting that the RBC purchased two batches: the first five serials (26 episodes) were purchased by 6 September 1965, and the other six serials (27 episodes) by 13 December 1966.

Rhodesia was the first east African country to screen the series, and being such may have acquired new prints from the BBC.

It's also possible that Gibraltar was the country supplying films to Rhodesia. As noted below, the series' debut in Rhodesia was delayed by three weeks, presumably as a direct result of a late supply of the films (which were sent by sea, via the Suez Canal, then by rail from Beira to Salisbury).

When RBC debuted the series in September 1965, Gibraltar was still airing The Keys of Marinus, so it seems that Rhodesia had at least taken delivery of Marco Polo – the last story in the TV listings, incidentally! – at that stage.

When Rhodesia declared its independence in 1965, the British government subsequently imposed trade sanctions, with effect from February 1966. By this time, RBC had clearance on the first five serials only and was screening Marco Polo.

But comments recorded in 1968 HANSARD REPORTS, when the matter of the BBC selling programmes to Rhodesia is raised, it is made clear that when the Prime Minister "announced the embargo on virtually all trade with Rhodesia, it was not the intention to interfere with the free movement of books, periodicals and cinema films. Television films come under the heading cinema films."

Indeed, during 1966, 1967 and 1968, the RBC continued to screen a number of popular British programmes, such as Danger Man, The Avengers and various Gerry Anderson series, so it's clear that they continued to air British-made programmes unhindered, and this would likely have included Doctor Who.

But of course although there was no intention to interfere, it's still possible that there was some form of interference down the line that prevented Rhodesia from purchasing further episodes after The Rescue.

According to information supplied by Richard, who lived in Rhodesia at the time (see below), the eight stories that aired were:

According to Richard, due to the trade sanctions that had been imposed on Rhodesia prior to its independence, British programmes were often recorded off-air in the UK (on VHS?), and smuggled into the country, then broadcast from that format.

However, the fact that eight stories are officially recorded by the BBC as being sold, and that sanctions had been lifted by 1980, does suggest that this illicit method was not employed for all these episodes of Doctor Who.

The tapes would have been PAL, and with English soundtracks. 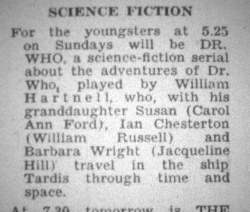 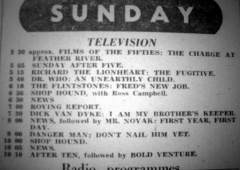 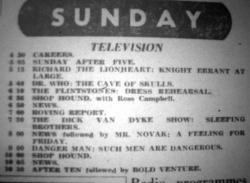 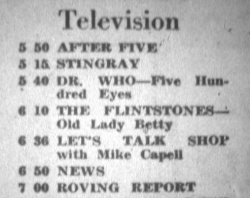 The series was due to debut on Sunday, 5 September 1965, at 5.40pm. The listing for that date actually said "DR WHO?", which might indicate some uncertainty as to whether it would screen. The series was also listed the following week, 12 September, this time without the question mark. However, on 19 September, the slot was filled by Forest Rangers, which was the series that had previously occupied the 5.40pm timeslot.

Rhodesia finally saw the first episode on Sunday, 26 September 1965, at 5.40pm. The series remained on that day and timeslot until at least 9 January 1966. TV listings after that date have not been located.

But if the series continued airing uninterrupted, then it ran until 25 September 1966. (As noted above, the second batch of episodes was paid for by 13 December 1966, which suggests the broadcasts did continue...)

Fate of the Prints

Rhodesia definitely sent its prints of the first serial to Zambia by air, rather than road or rail, a fact recorded in Zambian newspapers (the railroad linking Rhodesia and Zambia was out of service between 1964 and 1980); as a direct result of Rhodesia's own delay at starting the series on its intended date, Zambia's debut was similarly held up by four weeks. Incidentally, episodes of The Forest Rangers were used to plug the gaps in Zambia as well! 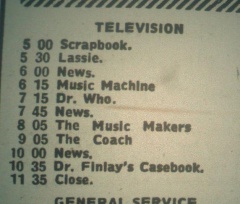 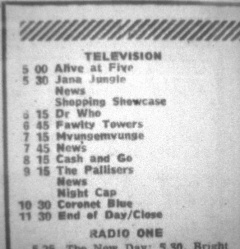 The first published run of Doctor Who in the 1970s was on Saturday, 13 January 1979, at 7.15pm. The first serial was Pyramids of Mars, which Richard recalls:

"… was missing the first few minutes, so it started where Sarah and the Doctor came out of the TARDIS into the priory.

"I remember Image of the Fendahl being screened when I was in Centenary, which was 1978 or 79. Also saw The Face of Evil. The fourth one was The Sun Makers. So it was four .. but at random, it seems, depending on what they could tape and/ or send through.

Based on Richard's information, these 20 episodes concluded with The Ribos Operation.

Based on Richard's recollection, these would have been three further Key to Time adventures:

"They also showed most of the Key To Time episodes, in order (but not all of them - I never saw The Androids of Tara, or the final one (The Armageddon Factor)… so I never knew how it ended until Target published the book and I could read the story! (I wrote a letter to Douglas Adams at the time about The Pirate Planet, because I didn't think the shrunken planets in the Captain's display cabinet was really physically possible, and he wrote a very polite and accommodating reply - poor man!)."

There are only 12 episodes to account for but 14 airdates, so either two were pre-empted during this short run, or the final two published airdates are incorrect. (It is also possible that Richard's memory is incorrect, and this 1980 run included a 6-parter – The Armageddon Factor, perhaps?)

As noted earlier, these episodes were all transmitted in black and white.

TV listings have been obtained from the newspaper The Rhodesia Herald.

For the Hartnell episodes, the listings for "DR WHO" appeared in a TV and Radio pull-out guide that was published in the Saturday edition, and which covered the up-coming week's programmes. Unfortunately, the supplement for 15 January 1966 carried TV listings for the Saturday only, and after that, the supplement was either no longer published, or simply not photographed during the transfer to microfilm.

There were no Sunday papers held, and Saturday's did not also print Sunday programmes, so it was not possible to check any Sunday daily listings. Therefore listings are not confirmed after Marco Polo episode three, and are therefore assumed in the Airdates guide to have continued to air on Sundays.

(We checked random dates to the end of 1968 in case the series shifted to a different day of the week, but there were no further listings. On that basis, it's very likely the episodes always aired on Sundays.)

As noted above, the series was supposed to start on 5 September 1965. The pull-out Guide in the 28 August paper carried a small preview for programmes starting "next week", and said: "For the youngsters at 5.25 on Sundays will be DR WHO, a science-fiction serial about the adventures of Dr Who, played by William Hartnell, who, with his granddaughter Susan (Carol Ann Ford) [sic], Ian Chesterton (William Russell), and Barbara Wright (Jacqueline Hill) travel in the ship Tardis through time and space.

In the 4 September 1965 paper, the first after the delayed premier episode, there was a small feature: "WAR WAGED ON THE EARTH", which said "Dr Who, a science-fiction serial, will soon be telecast by RTV. Pictured here is a being from one of the six outer galaxies that wage war on Earth". Accompanying the text was a publicity photograph of Trantis, from Mission to the Unknown, made on 6 August 1965, but which had not yet screened in the UK. (It aired on the BBC on 9 October 1965.) The fact that they say "will soon be telecast of RTV" and yet there was also a billing for the series in the 5.40pm Sunday slot, highlights uncertainty as to whether or not the episode would play.

(Of note, the very same text description of UGH (United Galactic Headquarters) meeting on "the planet Varga" appeared a few weeks later as part of the Zambia News 's 19 September 1965 preview of "DR WHO" due to shortly screen in Zambia. Obviously both countries were supplied with the same publicity material by the BBC when they were supplied with the episodes.)

The Herald listings gave the title as "Dr Who". None of the episodes was given a story title.

Papers for the rest of 1979, and through to the end of 1985 have been checked, but there were no further listings for Doctor Who.