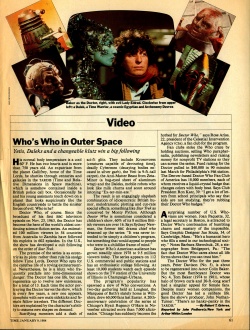 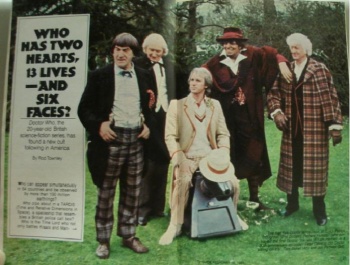 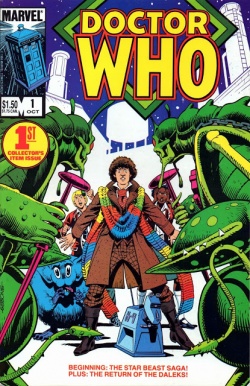 Print ad for BBC programs available through Lionheart, including 470 episodes of Doctor Who; Broadcasting 10 December 1984

- For Resurrection of the Daleks, Lionheart was sent different versions of the episodes including undubbed first edits: early 25 minute cuts of parts 1 and 2 (the latter was missing music and sound effects, and had several extra or extended scenes), plus two 45-minute edits (the second of which was missing music and sound effects). Lionheart created its omnibus "movie" versions by combining the two 45 minute edits. (A few years later, corrected versions with the missing audio were supplied - a fully-dubbed new 4-part edit was known to be shown by Canadian station TVO in December 1986.) 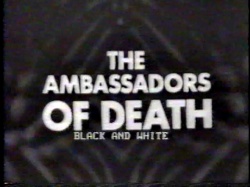 On-screen caption explaining that the episode was in black and white!

- At the time the 24-story package deal had been signed off in April 1983, Frontier in Space existed only in black and white. However full colour PAL copies of Frontier in Space were recovered from Australia in late 1983 and these were converted to NTSC and replaced the b/w copies that would have otherwise been in the US syndication package.

- Since Planet of the Daleks and Invasion of the Dinosaurs both had one episode that was in black and white, the serials were re-edited into 5-parters. A supply error by the BBC meant that several stations received and aired the b/w part 3 instead of part 6. A few years later a replacement "Part 3" was assembled from Parts 2 and 4, so the serial could now be sold as a 6-parter. It wasn't until 1993 that the proper 6-part version of Planet of the Daleks with its b/w part 3 was made available for US syndication, but with few sales being made then, this version would not have had a very wide distribution.