30 Years in the Tardis 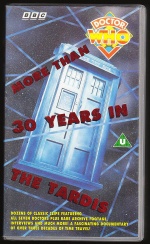 30 Years in the TARDIS is a one-off, 50-minute television documentary, broadcast to celebrate the series' thirtieth anniversary. Directed by Kevin Davies (see Sci-Fi Channel Europe and Dalekmania), it was originally transmitted Monday, 29 November 1993 on BBC1.

An off-air videotaped copy was shown by the British Forces Broadcasting Service (BFBS) on the Falkland Islands on 12 January 1994.

The documentary was shown in the United States on various PBS stations over the years, including New Jersey, KTEH (San Jose), WFYI, WQEX, WYIN, WNIT, Louisiana Public Broadcasting, Maryland, KSPS in Spokane, and WXEL in Florida.

With the title More Than 30 Years in the TARDIS, a re-edited extended version (running to nearly 90 minutes) was released on BBC VHS in November 1994, and later in 2013 as part of "The Legacy Collection" DVD box set with Shada. 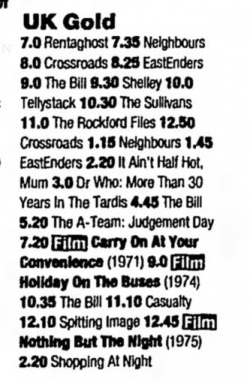