The Trial of a Time Lord

Published listings for The Trial of a Time Lord, for KRMA, Colorado, August 1987, using original working or novelisation titles! 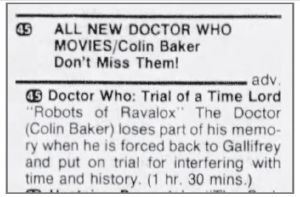 Listing for the first episode of 'Trial of a Time Lord' on South Carolina Educational TV, 7 Nov 1987

This story is made up of four separate narratives, with 'official' alternative titles; in the case of the last two 'stories' the titles were created for the novelisations:

This 14-part story aired in the following known countries. They are listed in chronological order according to known airdate. If no month is noted, the actual airdate is not confirmed, and is a close approximate. (Refer also to Selling Doctor Who for expanded airdates.)

More Information
Title: The Trial of a Time Lord

When broadcast episodically, the above blurbs were used for episodes 1, 5, 9 and 13. The others had only the cast.