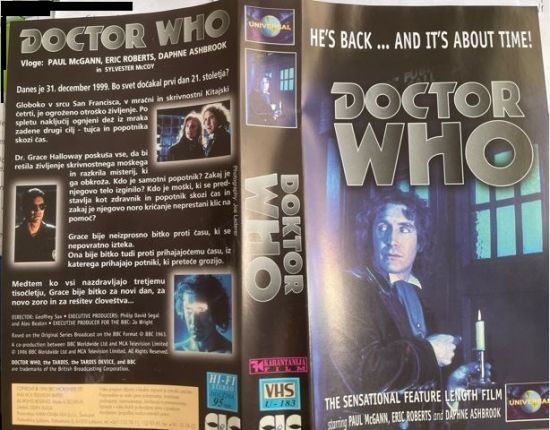 Cover insert for the Slovenia VHS tape of the TV Movie

A brief series of Doctor Who was seen regionally in the former republic of Yugoslavia in 1986 and 1987 -- see that profile for further details.

In June 1991, SLOVENIA was the first of the seven countries to split from the federation and become an independent sovereign state.

The Paul McGann TV Movie was released on subtitled VHS tape in 1996; the MCA/Universal/CIC Video tape was distributed in Slovenia by Karantanija Film, based in Šentrupert.

Curiously, while all the text on the front cover is in English and retains the original title "Doctor Who", the text on the back of the box - which also bears the English title - is in Slovenian, and the spine says "Doktor Who".

The TV Movie was later shown on the Croatian TV channel HRT1 aka HTV1, which was available also in Slovenia. Billed as "Doktor Who", the (presumably subtitled) film aired on Saturday, 18 September 1999 at 1.40am -- see that country's profile for more info.