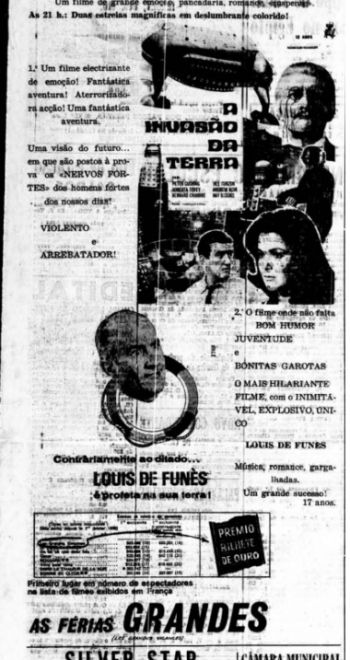 MADEIRA is an archipelago in the north Atlantic Ocean off the north west coast of Africa. It is an autonomous region of Portugal.

The two largest islands - Madeira and Porto Santo - are the only two that are populated.

The TV series was not shown there, but the second of the two Peter Cushing / Dalek films was.

The subtitled film - with the Portuguese title '"A Invasão da Terra" (The Invasion of Earth) - premiered on the island of Madeira on Wednesday, 23 September 1970. It played at the Cine-Jardim theatre from 9pm as the first ('A') picture in a double-bill with the 1967 French comedy "Les Grandes Vacances" ("As Férias Grandes"). This session had a "17" age rating.

The following day, the two films were shown - now with the Daleks as the second 'B' picture - at the João Jardim cinema, at the earlier time of 5.15pm.

The film didn't play at all on the Friday and Saturday. Its final showing was on Sunday, 27 September 1970, now at its third location of the Pavilhão Santo António cinema at 8pm; it was still the 'B' picture, but this time paired with the 1969 American comedy "Cactus Flower" ("A Flor do Cacto").

These details have come from the local newspaper, Diário de Noticias. It's not known if the film was also shown on Porto Santo (there was just one cinema, which operated only during the summer); newspapers for that island have not been located.

The 1982/83 novelisations published by Editorial Presença in Lisbon, Portugal were available on the islands.

Madeira in Doctor Who