A number of remote television stations had no access to live television feeds via a microwave network and instead were programmed on a delayed basis using TV recordings.

To this end, a film print copy known as a Kinescope was sent out to those stations. These kinescopes were made at the CBC headquarters in Toronto by aiming a special synchronized camera at a flat television monitor through which the live microwave network signal was being broadcast. Commercial and station breaks were 'printed-in' and retained.

Generally speaking, kinescope duplicates were a poor second in terms of broadcast quality, but given the low definition television sets used in the 1960s, and the small to medium-sized audiences served by those remote areas, the difference would not have been that noticeable, especially by those viewers who only ever saw television broadcasts by that method and wouldn't have known any different.

The stations that were part of the kinescope network were: 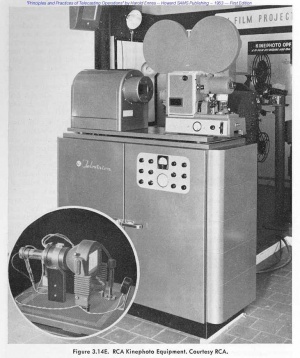 The bicycle system to relay kinescope films from one station to another was approved by the CBC in the 29 Oct 1959 session of the Board of Directors meeting. Prior to that point, kinescopes shipped to a station were returned to the CBC for inspection prior to being shipped to another station. In the initial bicycle route, kinescopes would travel from Toronto to CJDC Dawson Creek, BC then on to CKPG Prince George, BC where it would then be sent to the regional headquarters at CBWT Winnipeg (for inspection) before being forwarded to CFLA Goose Bay in Labrador. The bicycle route would evolve over time with stations dropping out and being added.

Another facet of CBC kinescope traffic in the 1960’s is the use of kinescopes for the weekday afternoon programming block in Atlantic Canada with CBHT Halifax relaying the signal to all of Atlantic Canada. This was necessary to ensure that the local time for Atlantic Canada afternoon programming is the same as Toronto (note that Halifax time is one hour ahead of Toronto so a traditional time-shifting operation is not possible). This process was outlined in the 27 August 1957 Board of Directors meeting (Children’s block = afternoon block; reversing network = reversing the direction of signals over the microwave network). In 1965 this resulted in a delay of one week for Atlantic Canada weekday programming from 3 PM to 6PM.

In view of the fact that stations that relied solely on kinescopes experienced an extra one week delay for afternoon programming relative to other programming (for example, Prince George – see Instant TV article), it is quite clear that the CBC were supplying CBHT Halifax with the weekday late afternoon block of the kinescope film package earmarked for the bicycle route. As such, CBHT Halifax was a partial participant in the kinescope bicycle route.

Detailed information on the CBC kinescope bicycle route in the 1960’s is available from a number of sources:

From this body of information it is clear that only one set of kinescope prints were in circulation. This meant that some stations experienced a very large network delay. The termination point for the kinescope route was nearly always CFLA Goose Bay (a delay of about 5 weeks).

Although the bicycle system was a relay from station to station, the CBC maintained control over all shipping and collection of films. From page 273 of the Public Hearing of the Board of Broadcast Governors on 27-28 August 1963 in Ottawa:

Mr. L. B. MacDonald (CBC): For the other unconnected stations such as Goose Bay, Prince George, Terrace and so on, which are served as part of the national service of the CBC as non-connected stations of the network, the corporation [i.e. the CBC] bears the cost of the distribution and collection of the films.

Excluding Halifax, the normal bicycle pattern for the first half of 1965 for kinescope-only stations was to move west starting at CBWBT Flin Flon in Manitoba, followed by CKPG Prince George and CFTK Terrace in British Columbia before reversing direction and heading east to CFLA Goose Bay in Labrador.

Compiling all the information together, the bicycle route for kinescope films for Doctor Who episodes was:

NOTE: The kinescope bicycle list does not include the possible distribution of kinescopes to Saskatchewan stations for repeat broadcasts. CFQC Saskatoon aired 9 repeats from 5 July to 16 July 1965 – see Saskatchewan Repeats for more on those screenings.

The above list also does not include intermediate shipping points. For example, films returning from CBWBT Flin Flon in Manitoba (MB) were likely returned to CBWT Winnipeg for inspection before being sent anywhere else. From the 1959 CBC executive meeting Winnipeg was chosen as the processing point for films returning from British Columbia (BC) prior to shipment to Goose Bay in Labrador.

It is known from the 1961 hearing that awarded Flin Flon a TV station license that Flin Flon received some of its films from Winnipeg (Public Hearing of the Board of Broadcast Governors, April 11-13, 1961, Ottawa, Ontario):

Page 176
Mr. B. MacDonald (CBC), “The station at Flin Flon will be programmed by means of kine recording and film.”
Page 178
Mr. B. MacDonald (CBC), “The weekly program schedule of 60 hours will include about 48 hours of national network service and the remaining 12 hours will be provided from the program service of the Prairie region ... The Winnipeg contribution would include the majority of their local live productions along with some feature films.”
Page 184
Mr. Allison (BBG): “How would the programming from CBWT Winnipeg, and from the national network, be taken into Flin Flon -- would this be by regular air service?”

Please note the question mark next to CFLA Goose Bay entries as there is no way of verifying if Doctor Who ran for all 26 episodes in Goose Bay. As this station was operated by the United Stated Air Force the majority of the content was US programming (using a lot of AFRTS material) so the station was given a lot more latitude to choose its own programming, so there is no guarantee CFLA carried all 26 episodes.

Even though several kinescope stations dropped out of the Doctor Who distribution circuit there is no reason to believe that Goose Bay received its films any earlier. Once a series starts at a station the network pattern of weekly episodes would likely be maintained.

The Goose Bay question is further complicated by the fact that repeat broadcasts were shown in Saskatchewan (CFQC Saskatoon). If CFQC did indeed use kinescopes for its two-week long stretch of repeats it would have needed to receive this set of films in either one large batch or in several batches in rapid succession. It would have been more likely that the deal to supply films to CFQC Saskatoon came about if the films returning from Flin Flon were being stockpiled in Winnipeg (CBC Prairies Regional Headquarters) with no need to forward this material to Goose Bay.

Although we know a lot about the kinescope bicycle route there is little information on what happened to the films once they complete the circuit. Usually, the films should be returned to their point of origin which for Doctor Who is station CBLT Toronto. If the series did not continue in Goose Bay, films returning from Flin Flon would have likely been stockpiled at CBWT Winnipeg, at least for a while. If the series did continue in Goose Bay the films should have been returned to Toronto. With no road access at the time, Goose Bay depended heavily on air freight service with one of the main shipping points being via Montreal.

As noted elsewhere, the ultimate fate of the kinescope prints was likely to have been destruction. It's remotely possible that they were sent to BBC London for the purposes of using them as audition prints. But since the kines were low quality, had commercials 'printed-in' and possibly had timing cuts, it's far more likely that they ended up in the incinerator…

For Flin Flon, the series started on Saturday, 30 January 1965 at 4:30 PM using kinescope films. (No episode aired 13 February 1965 due to coverage of the Bob Hope Desert Golf Classic.)

Saturday episodes ran to 10 April then switched to 5:30 PM Wednesdays on 28 April. The series finished in Flin Flon on Friday, 9 July 1965.

There was a network delay of one week for Saturday episodes, and two weeks for the Wednesday/weekday episodes. 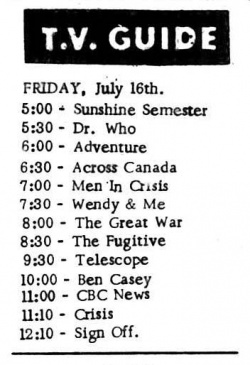 In joining the live microwave network on 1 March 1965 station CKPG dropped the last instalment of An Unearthly Child and the first part of The Daleks to catch up with the live network. At that point its schedule matched the other stations in British Columbia, such as CBUT Vancouver. 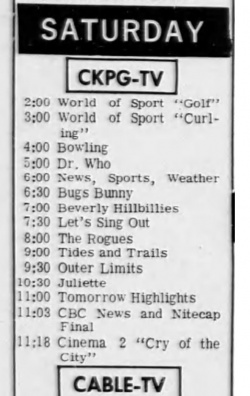 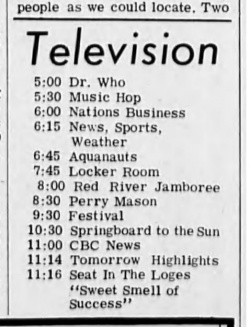 Notes: 1 A4 and B1 not shown when CKPG switched from kinescope to live feed

CFTK operated with a network delay of three weeks. Using Kinescopes, CFTK Terrace aired ten Saturday episodes from 13 February 1965 to 25 April 1965 at 5:00pm before dropping the series, leaving the final episode of The Daleks unaired.

In all fairness to CFTK Terrace, this station had a short broadcast day with the station starting service at 1:00 PM on weekdays. The schedule permitted one hour of youth programming on weekdays which was filled with the very popular CBC programs of Razzle Dazzle and Music Hop.

On other stations, Doctor Who swapped time slots with The Forest Rangers on Wednesdays, but The Forest Rangers was not even being shown in Terrace. The short broadcast day was due in part to the need to conserve fuel as mountain-top relay stations for CFTK were powered by propane generators which were typically accessible only by helicopter. 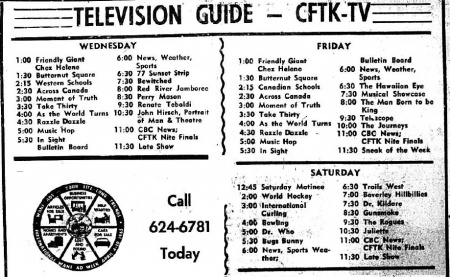 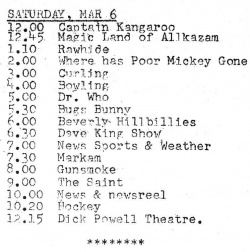 CFLA Goose Bay was operated by the United Stated Air Force (under CBC management). The base was multi-national, and was utilized by the RCAF, RAF and USAF over the years of operation.

There is no way of knowing how many episodes aired in Goose Bay. If all 26 episodes did air the series may have finished in Goose Bay around 13 August 1965.

Station CFLA Goose Bay was operated by the United States Air Force under a local CBC manager with the schedule primarily showing US content employing significant amounts of American Forces Radio and Television Service (AFRTS) material in addition to CBC films. At the time, Canadian broadcast regulations stipulated 55% Canadian content for programming and the history of CFLA Goose Bay was a constant struggle to reach a balance acceptable to all. Possibly, a British import such as Doctor Who could have been squeezed out of the schedule as a result (British Commonwealth programs only offered partial credit towards Canadian content rules), but CFLA Goose Bay was given a lot of latitude in this regard so this may not have mattered.

The US Air Force eventually handed over full ownership and management of the TV station to the CBC in 1973.

Fate of the CBC Kinescopes?

The set of 26 film print copies produced for distribution to television stations via the kinescope bicycle route cannot have been considered essential as separate master copies were kept.

From the 1950’s to 1970’s many extraneous kinescopes were destroyed by the CBC. Possibly, the Doctor Who kinescopes were turned over to BBC Toronto shortly after the series finished in Canada (where they were subsequently bicycled into other regions and/or used as audition prints?) or were destroyed immediately after use. We simply do not know what happened to this single set of Doctor Who kinescope prints. (The kines were generally low quality and had commercials 'printed-in', and as such were probably deemed as unsuitable for use within any bicycling network.)

From what we know about the kinescope bicycle route we can say that the most likely locations where the kinescopes met their final fate (most likely incineration) are stations CBLT Toronto and CBWT Winnipeg.