INDONESIA is a large island group to the north of Australia. Other neighbouring countries include Malaysia, Singapore, Brunei and Papua New Guinea.

TV broadcasts commenced in 1962, on the state-run channel TVRI.

The first private broadcaster - Rajawali Citra Televisi Indonesia (RCTI) (Malaysian page: HERE) - launched in August 1989, initially as a subscriber-only channel, then free-to-air a year later. It has the widest national TV coverage across the islands, via a network of more than 30 relay stations.

RTCI later became available - albeit with limited access - in Johor, the southern-most region of Malaysia, and Singapore.

Further private stations - such as SCTV and TPI - were launched in 1990. All TV broadcasts are in Indonesian or English (also subtitled?), with schedules dominated by locally-produced but also some foreign (mostly American) fare.

Doctor Who in Indonesia?

Did classic Doctor Who air on TV in Indonesia?

It did -- at least according to the Malaysian Wiki page for RCTI.

In a sub-section for "1989-1999" - HERE-, "Doctor Who Classic Series" was one of the many programmes that was screened by RCTI -- although somewhat curiously, Doctor Who is the only series in that list of programmes identified by a specific broadcast date range -- "1995-1998".

BUT -- in the Indonesian Wiki for RCTI -- the equivalent sub-section HERE - the list of programmes is slightly different and doesn't include Doctor Who. 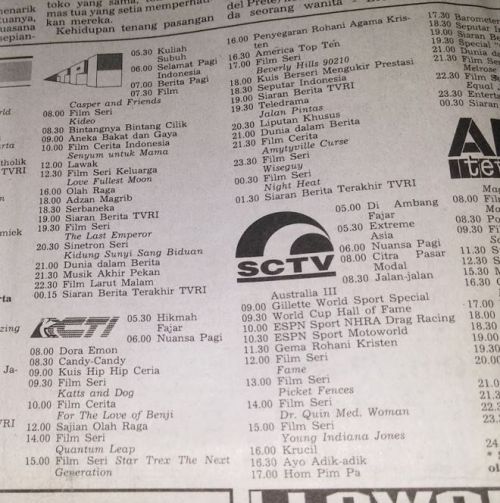 Sample of TV listings from 1990s Indonesian newspaper (title and exact date unknown) showing RCTI and other TV stations. Most of the TV programmes here are locally-produced or imported from the US

We don't have access to any archived Indonesian newspapers, and although some Singapore and Malaysian papers from the late 1990s are online, these don't carry listings for the Indonesian TV channels.

We did find online a few random clippings from Indonesian newspapers with comprehensive TV listings for all the local stations (such as the example at right), but there were none with Doctor Who.

The WayBack Machine site has a few archived pages from RCTI's old websites, but the only TV schedules saved are from 1997 - and there are no listings for Doctor Who in any of the captured pages.

One of the other WBM saved pages is for "Serials on RCTI", which lists a number imported series. Doctor Who is not included.

BUT, there are a few programmes (such as Star Trek Voyager) that appear in the 1997 schedules and the "Serials on RCTI" page which are not listed in either the Malaysian or Indonesian Wikis, proving that neither Wiki list is fully complete or reliable.

There is a "Doctor Who Indonesia" Facebook group HERE, but it's New Series-focussed. (The series was shown on BBC Entertainment (Asia) from 2006 to 2017 -- This Week in Doctor Who (incomplete listing) -- and briefly on Global TV (Indonesia) from 2012.)

There is no mention of RCTI within this FB group, and no one reminisces about seeing any older episodes in the late 90s.

Merchandise featuring classic Doctors was available in shops, mainly in the form of imported items such as the novels published by BBC Books, and various non-fiction titles, as well as the Titan graphic novels.

So -- did classic series Doctor Who air on RCTI?

Since the only place that says it did is that sub-section on the linked page from the main Malaysian Wiki - and we know how unreliable Wiki can be - we have our doubts.

It definitely wasn't on in 1997 (the RCTI schedules on WayBack Machine make that clear), which means the date of 1995-1998 on the Wiki is highly questionable at best. While it's possible it aired in 1995, 1996, and 1998 only (thus skipping 1997 entirely) the lack of any solid evidence found elsewhere to back it up puts the Wiki's claim in some doubt...

Indonesia in Doctor Who