Dr. Who in America 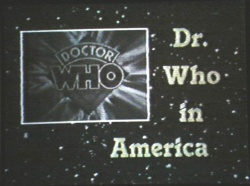 "Dr. Who in America" is a 57 minute documentary for direct-to-video release, produced in late 1983 by Scorpio International Ltd. for the New Jersey Network. The special was hosted by Tom Carroll, and directed by James B. Brandt.

The Tom Baker and Christopher Crouch interviews were conducted while both were attending the NADWAS convention at Palo Alto, California, held 27-30 May 1983.

The special premiered at a Creation convention in Chicago in July 1984 and was later broadcast by a few stations such as KUHT (Houston) in October 1984, WNPE (Watertown, NY) in November 1984, and Georgia Public Television in March 1985.