Dr Who and the Daleks

The two Peter Cushing Dalek Movies produced by Amicus Productions / Aaru screened in cinemas around the world, aired on television many times and were released on various home media formats.

BBC Radio's Light Programme broadcast a long-running series of abridged film soundtracks on its weekly Movietime session. 27 minutes of audio from the second movie plus additional linking narration aired on 18 November 1966, from 7.31pm to 8pm. These transmissions were also heard in parts of Europe, such as in France. 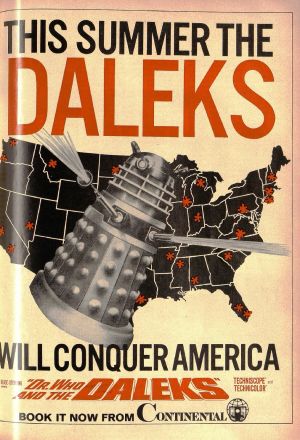 Dr Who and the Daleks in America!

In all likelihood, most of the world's English-speaking countries - many of which never got the TV series, and as such don't have profiles on this website - got one of or both films. And after they had been shown in the main metropolitan centres, the films had a second life playing in smaller independent regional theatres in the years and decades that followed. And as such, it would be impossible to catalogue every single cinema screening, so only some known instances are included below.

The films were distributed by BLC / British Lion / Regal Films International, and in some foreign territories by The Rank Organisation, Rosa Films, and New Arts Associates Inc, although the second film had a much wider distribution than the first, especially in Europe.

Only the first film received a cinematic release in the United States and Canada. It was usually shown in a double-bill with another SF or horror film, often a Japanese "monster movie". The second was never distributed as a theatrical presentation in North America.

Prints for non-English territories were either dubbed or subtitled. While foreign posters often displayed a translated title, the film prints themselves would have retained the English credits, but with the foreign title only displayed as a basic text caption, if at all.

But some foreign trailers - such as the one from Italy (see below) - did have fully-realised translated title cards, and given the expense to produce, these new titles would have also been applied to the film prints.

In North African and Middle Eastern countries where the second film was shown, the prints were in English or had been dubbed into another language (usually French or Italian) but were exhibited with added Arabic subtitles.

For those Asian countries where Chinese Mandarin and/or Cantonese was spoken, the second film was dubbed into the former dialect only; Cantonese viewers had to make do with subtitles.

The arrival of the second film within Latin America was late - it was subtitled in 1977 - and distribution was very limited; the only country we could find clear evidence of the movie showing was in Argentina. But both films were later dubbed into Latin American Spanish and shown on TV in the late 1970s / early 80s.

Soon after they had acquired the rights, Lumiere Pictures re-released the two films to cinemas, which appeared in various independent theatres in the UK in 1993, 1994 and 1995. Both were also shown together for several special double-bill events in 1994 and 1995.

Both films were digitally re-mastered in High-Def and had a limited return run in UK cinemas from 10 July 2022.

In November 1966, Dell Publishing Co Inc of New York released a 36-page comic adaptation of the first Dalek movie in the United States. It retailed for 12c.

A 14-page Spanish-language comic adaptation of the second film appeared in issue 400 of the long-running Argentina film magazine "El Tony"; with a cover date of 14 February 1978, the timing of this was no doubt linked with the film's release into cinemas the previous year (see above). 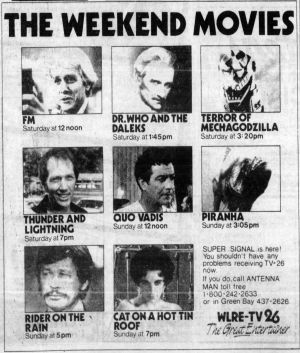 WLRE in Wisconsin never aired the TV series, but it did screen "Dr Who and the Daleks" in May 1984

The movies have been broadcast on television many many times in many countries (some not profiled by this website), and as such it would be impossible to catalogue all the TV appearances, so only some known instances are included below. (Additional info on TV appearances can be found on the main country profiles.)

The sequel made its debut in the US on television in 1969, but was usually billed in print under the shortened title "Invasion Earth 2150 AD".

Both films have been shown many times on TV in the UK: they were first broadcast on BBC1 in 1972. This was in a cropped 4:3 pan and scan presentation. They aired again several more times on that channel in the 70s and 80s (sometimes as unscheduled filler for cancelled sports), while the sequel made a single appearance on BBC2 in 1983. BBC2 also showed the films in early 2005 prior to the start of the New Series.

The films debuted on Australian TV in 1972 and 1980 respectively - see our airdates listing here.

In Canada, the first film was shown on CKVU in 1976 as a direct lead-in to a run of Jon Pertwee serials. In 1983, Dr Who and the Daleks was edited into 4 parts and shown by TVOntario in a serialised form. Both films later aired on various other Canadian terrestrial and satellite stations (such as SPACE and its rebranded identity CTV Sci-Fi) in the early 2000s.

In September 1990, both were screened during BSB's "Doctor Who Weekend". When BSB merged with Sky, the films aired several more times on Sky Movies (where they had also aired previously in 1989), Sky Movies Gold and The Movie Channel in the early 1990s and on Sky2 in 2004.

When Lumiere acquired the rights in 1992, they re-released the films to a number of foreign satellite stations across Europe. These would have been the first digital copies of the films, replacing the film prints used previously.

Both were broadcast for the first time in a widescreen format on a UK terrestrial station when Channel 4 aired the two in November 1994 and January 1995 respectively (with several more airings of each through until 2009). For these digital screenings of Daleks' Invasion Earth, the pre-credit 'robbery sequence' had been repositioned to come after the titles. (This re-edited version was later used (accidentally?) for the first DVD release (see below).

The Channel 4 screenings were shown on a deferred basis two weeks later on the Welsh TV channel S4C.

It wasn't until the early 2000s that Daleks' Invasion... was dubbed into European Spanish for satellite broadcasts.

The two films were shown on UK's Channel 5 in November 2013 for the TV series' 50th anniversary celebrations. In more recent years, they have aired on channels such as Movie Mix UK in 2015-2016, and Sony Movie Channel in 2016.

In the early 2020s, the films were available on various international streaming sites such as Netflix.

In 2022 both films were re-mastered in High Definition; they were shown by the Horror Channel on 29 May 2022 in a "Dalek Double Bill".

The re-mastered films dubbed into French and German were available on foreign streaming platforms such as AppleTV/iTunes. 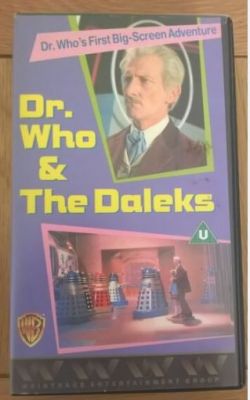 The distribution rights to the British Lion film library were held by EMI in 1976. In 1982, Thorn / EMI released both Dalek films on VHS and Betamax for the first time in the UK - and later in Australia / New Zealand, and just the first film in the United States. The first film also came out in Spain on VHS in 1984, while the sequel only was released in Japan and Greece. The tapes were in a cropped 4:3 pan and scan format.

EMI was sold to Cannon in 1986, and the new owner issued the second movie only in Italy, and the first film in Japan. The second film was released in the US on VHS and Betamax (by HBO / Cannon) and the first movie was also re-issued in new packaging.

Cannon sold the catalogue to the Weintraub Entertainment Group in 1987; the home media rights were given to Warner, and they re-issued the tapes several times in the UK (including a special WH Smith 'Exclusive' edition), Australia (also through Warner), and the US (in a long-play format by GoodTimes). The sequel was also released on tape in Spain in 1990.

The rights were acquired from Weintraub by Lumiere Pictures Ltd in 1992. The UK home media rights were still held by Warner, preventing Lumiere from issuing their own branded tapes to that market. But they did issue new tapes in the US only in 1994, this time through their agent Republic Pictures. With the UK market out of reach, Lumiere instead released the 30th anniversary celebratory documentary "Dalekmania" in July 1995.

In early 1996, Warner UK issued brand new widescreen presentations on commercial tape in the UK (under the "Beyond Vision Cult Classic" range). It can't have been a coincidence that these tapes were reissued at the same time as the TV Movie!

UGC was acquired by the French company StudioCanal, and they issued the Dalek films on DVD for the first time in 2001. For these discs and subsequent re-issues released in the UK, United States, and Australia / New Zealand, StudioCanal used the re-edited TV version of the second film (see above). (This 'error' was 'fixed' for all post-2010 DVDs and Blu-ray releases.)

Over the next decade, there were new subtitled or dubbed foreign DVD editions released in Japan, Italy, France, Spain and Brazil; some of these were box-sets of both films. (Some of the dubs or subtitling may have been new, not reused from the previous VHS releases.)

Most of the DVD / Blu-ray sets released by StudioCanal (or their foreign licencees - e.g. Anchor Bay in the USA, and Universal in Australia) included the 1995 "Dalekmania" documentary.

Both films were re-mastered in 2022 and received brand new DVD / Blu-ray / 4K releases with a wealth of new bonus material. The films were also dubbed and released on disk in Germany for the first time.

Only some of the VHS and DVDs are noted below. See the main country profiles plus the following lists of known releases:

The following tabled countries are those whose profiles contain specific reference to the movies being shown in theatres and/or on TV and/or released on Video/DVD (with the foreign or alternative titles given where known).

KEY: The table below is for cinema releases unless indicated otherwise: Y [film played in cinemas under original title]; X [film didn't play in cinemas at all]; blank [not known if seen in cinemas] (Non-cinema showings - TV / Video / DVD / Blu-ray - are in brackets)