From BroaDWcast
(Redirected from Britbox)
Jump to navigationJump to search

BRITBOX is a US-based video-on-demand online streaming service, launched as a joint-venture by the BBC and ITV in March 2017, with a vast catalogue of old and new BBC and ITV programmes. The initial subscription rate was $6.99 per month. Programmes had closed captioning subtitles.

Subscribers to BritBox could also view their purchases via the Amazon Video Channel app.

BritBox Canada was launched on 14 February 2018; its list of programmes was slightly different to that available in the US.

BritBox UK was launched in November 2019 (see section below).

BritBox Australia was launched on 23 November 2020; its programme selection is the same as BritBox UK.

DOCTOR WHO ON BRITBOX USA 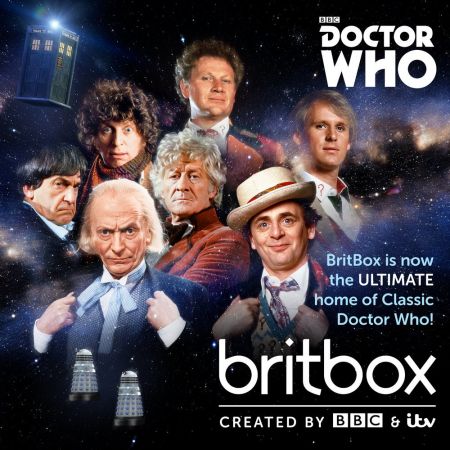 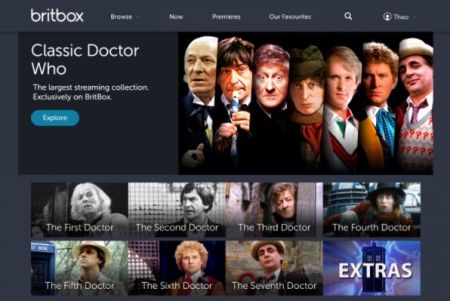 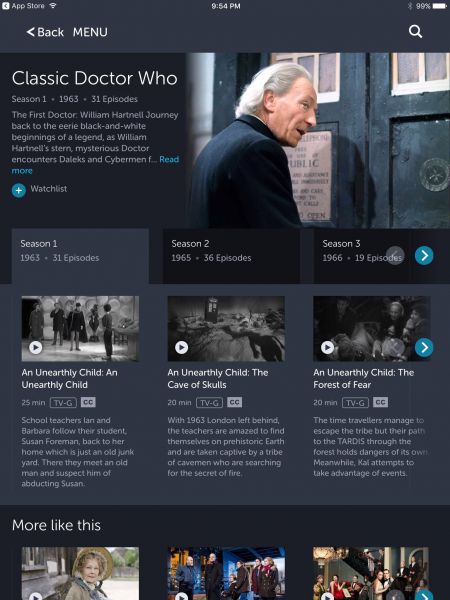 An Unearthly Child on BritBox 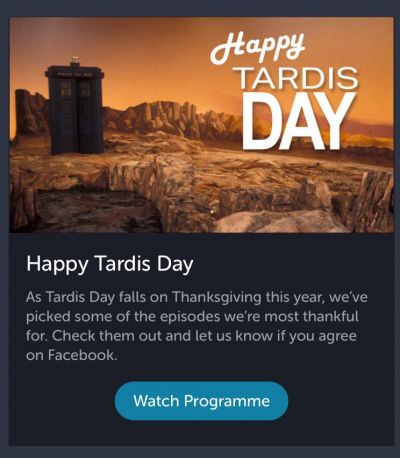 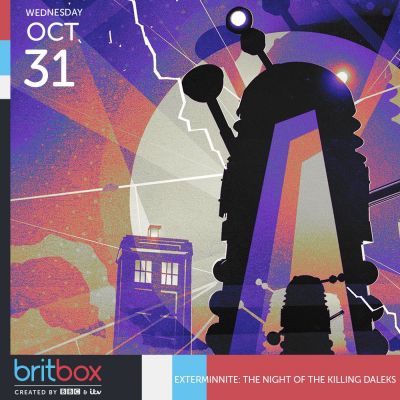 With the exception of six stories (below), the ENTIRE back-catalogue of 1963 to 1989 Classic serials was available with the launch of the US BritBox on 4 April 2017 (so we haven't included a table of stories). At the time it was the only platform on which all of Classic Doctor Who was available in the US. (The New Series was available exclusively on Amazon Prime.)

The stories from season 22 were in their original extended lengths, and not cut down to 25 minutes.

The handful of stories not available were - as was often the case - ones featuring the Daleks:

Also not included was the 1996 TV Movie.

One Dalek story that was available was The Chase, but unlike its appearance on Hulu Plus it was missing the clip featuring the Beatles.

The site also offered "extras" in the form of K9 and Company , the original "Pilot" version of the first episode, An Unearthly Child, The Doctors Revisited documentary series, and An Adventure in Space and Time docu-drama, and The Five(ish) Doctors.

Some reports stated there were "over 550 episodes"; if the 45 minute episodes are counted as singles, then the actual tally is closer to 545.

All the stories were, where possible, sourced from the DVD releases, and as such most of them were presented in a restored / colourised format, and in some cases with updated special effects.

Some of the programmes on the service - including The Talons of Weng-Chiang - had a disclaimer warning that the programme had racially insensitive content that may cause offence.

Unusually, the BritBox menu had listings for all the Doctor Who stories in broadcast sequence including those that were missing from the BBC archive and weren't actually available; the screens instead displayed the captions -

"Unfortunately this Classic Doctor Who story is missing"

or with the rather presumptuous -

"Sorry, we are unable to offer you this story at this time. Please check back regularly for updates"

In September 2017, BritBox released an exclusive in the form of a special presentation of the incomplete 6-part Patrick Troughton serial The Wheel in Space; this was a full reconstruction synching the tele-snaps to the soundtrack for the four missing episodes.

A teaser preview of the reconstruction was shown at San Diego Comic Con (held from 20-23 July 2017) during the Classic Doctor Who panel featuring Peter Davison, Colin Baker and Sophie Aldred (see Media below).

Although BritBox was not able to supply further reconstructions of missing stories, they did offer three incomplete ones, which utilised animation or a tele-snap slide-shows:

BritBox often released groups of themed stories around holiday events, such as:

The addition of the final six Dalek serials in October 2018 meant that ALL the complete Classic stories bar the 1996 TV Movie were available to view on BritBox.

On 16 July 2019, the two Peter Cushing Dalek movies were added to the menu.

DOCTOR WHO ON BRITBOX UK

A UK-based equivalent of BritBox (£5.99 per month subscription) was launched on 6 November 2019. In the press releases, it was stated that "More than 600 classic episodes of Doctor Who - broadcast between 1963 and 1989 - will be available to stream for the first time by Christmas [2019]".

The Radio Times - as well as other sites - stated that Doctor Who will be available from Boxing Day (i.e. 26 December) and that "…For the first time, all 627 remaining serials [sic] (i.e. those that haven’t been lost or wiped by the BBC) broadcast between the series’ start in 1963 and its cancellation in 1989 will be available on one streaming service, making it a real treasure trove for both die-hard Whovians and newer fans who’d love to catch up on the series’ background. […] This list will include Doctor Who’s original unaired pilot episode from 1963, and the recent animated versions of “lost” episodes that were recreated using original soundtracks and whatever footage and images were available to fill in the gaps in Doctor Who history."

On 21 December 2019, the channel formally released the full list of Doctor Who stories it would be showing.

Like the US equivalent, ALL the surviving full Classic serials would be shown - "129 complete stories … 558 episodes" … plus the TV Movie which wasn't available the US.

The provider also has a number of animated or reconstructed editions:

a number of "orphaned" episodes:

(The channel announced it was looking to expand the "orphan" collection further in 2020 once "rights and clearance issues" had been resolved.)

and several "specials" and "documentaries", making up the cited 627 episode count:

There will also be "collections" of themed serials, such as "New to Who", "Regeneration", "The Daleks", 'The Cybermen", "The Master", and "The Sontarans".

Some programmes - including Doctor Who's The Talons of Weng-Chiang - had onscreen disclaimers, warning viewers that the episode "contains stereotypes that some may find offensive”, which was reported by several newspapers: