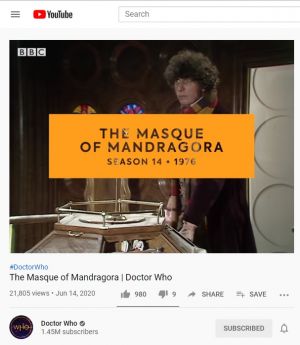 This online resource features clips, trailers, interviews and behind the scenes material.

Starting in June 2020, the channel launched a series of "mini" Doctor Who stories edited into 20 to 30 minutes of "highlights", with no titles or credits. (It is believed these are the cut-down compilations created for the "Behind the Sofa" in-vision commentaries on the Season Blu-ray sets.)

The stories released so far are:

with no doubt more to come...