AUSTRALIA is in the Pacific Ocean, and forms part of Australasia. One of its closest neighbours is New Zealand. 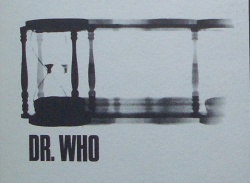 In the early years of television broadcasts, each state had its own regional scheduling, which meant that different episodes of Doctor Who aired on different days, often many months apart. On rare occasions, the same episode aired on the same day but in different states, which meant that multiple prints of some episodes may have existed, although there were other methods by which 'dual' transmissions across the different states could be achieved. There were not only scheduling differences between states but the larger ones – such as Queensland - also had regional city-to-city variances within the state.

In April 1962, the permanent telecommunications cable link between Sydney and Melbourne (via Canberra) was opened: this allowed for the relaying of and simultaneous broadcasts of programming between the three cities; Channel 9 was the first to adopt this service in 1963, but it's unlikely that the ABC ever used the cable for broadcasts of Doctor Who.

On 9 July 1970, the ABC 'opened' its microwave link between the east and west coasts of Australia, enabling the transmission of programme material across the country. The launch was promoted in a one-hour special, PROJECT AUSTRALIA (7.55pm to 8.55pm), featuring contributions from various Australian cities.

Colour transmissions began on 1 March 1975 using the PAL colour broadcast system. It is possible that some of the minor regional stations may have continued broadcasting in black and white for several months. (By 1977, less than 50% of the population had colour televisions.)

Full country-wide networking on the ABC had commenced by the early 1980s, although there were still regional variances throughout that decade, usually around regional sporting events. It wasn't until the mid-to-late 1980s that full satellite coverage across the entire country was achieved.

From 15 September 2003 through to 3 February 2006, the series returned to the ABC for a run of repeats, but which excluded a number of the stories penned by Terry Nation and/or featuring the Daleks; this was due to problems with securing rights from the Nation Estate. (A similar issue affected transmissions of Nation / Dalek serials on UK Gold in the 1990s.)

From 17 August 2011, the Australian SCI-FI channel (established in 1 December 2006) commenced a run of repeats that ran through to the end of 2012. The rebranded syfy channel continued to air episodes of the old series and the new series into 2015…

For the 50th anniversary itself, UKTV aired a marathon of complete stories, one for each of the eleven Doctors along with various documentaries and specials.

The principal language of Australia is English.

DOCTOR WHO IN AUSTRALIA 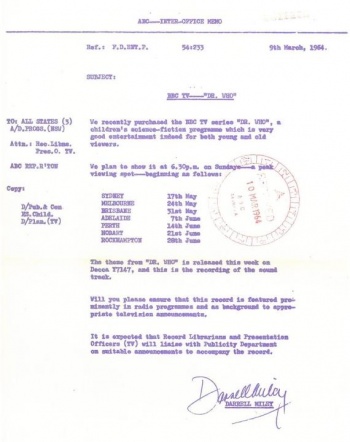 Australia was the second overseas country to screen Doctor Who (see Selling Doctor Who). It was, however, the first to be offered the series; and a purchase was confirmed in early March 1964, with transmission planned to commence from 17 May 1964, with other regions to follow.

The ABC duly received film prints from BBC Sydney, and these were sent to the Australian Film Censorship Board (AFCB) for classification; the first two episodes were viewed on 14 April 1964. The censors assigned an "A" classification to the first 13 episodes.

The ABC initially planned to schedule the series in an appropriate time slot for that classification, however after viewing the film print of The Daleks part one, the "negative effect" in the opening scene was mistakenly believed to be a fault on the print, so a replacement copy was sourced from London. This too had the same "fault" – so another replacement was requested. By the time the ABC was made aware of and accepted that the negative effect was deliberate, the original May launch date had past, and there were no longer any available slots in the TV schedule for the remainder of 1964. The new series was held over until January 1965. (New Zealand therefore took the honour of being the first foreign country outside the UK to screen the series.)

Australia is the only country to have screened Doctor Who virtually non-stop, screening episodes of all the Doctors (more or less) in 'chronological order'.

Bar two stories, Australia has the unique position of having purchased and screened every single story of Doctor Who, albeit not always screening them in strict story order.

And with the exception of around 30 stories, it was in Australia that the most number of serials had their foreign debut, usually within a year of the UK screenings. (Other countries in which stories made their foreign debut were the Netherlands, Hong Kong, United Arab Emirates, New Zealand, Canada and the United States.) 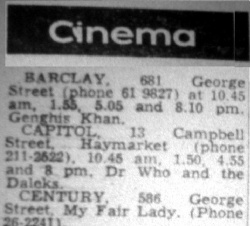 Dr Who and the Daleks at the Capitol, Sydney, 23 December 1965; listing from the Australian 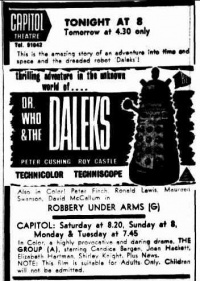 Dr Who and the Daleks at the Capitol, Canberra, October 1966

Both Peter Cushing features played in cinemas across the country: for instance, the films opened in theatres in Sydney on 23 December 1965 and 15 December 1967 respectively. The first film played elsewhere, such as in New South Wales and Canberra during 1966.

Both films aired on television (on a regional basis) several times on a number of different stations (but not on the ABC).

The Stanmark Productions Ltd advertisement from 1966, identifies Australia as one of sixteen countries screening Doctor Who by January 1966.

Australia is named in the list of 27 countries in The Making of Doctor Who 1972 Piccolo edition.

This figure of 93 is made up of the same 19 Pertwees and 5 Bakers from the 1977 list, plus 33 additional Bakers, 20 Davisons, the 5 previously unaired Pertwees, and 11 Colin Bakers.

Doctor Who has aired on three different broadcasters in Australia:

The series aired across Australia on a regional basis:

Episodes tended to be aired at the same timeslot in each region; there is a two-hour time difference between west coast (Perth) and east coast (Brisbane), so there was always at least this slight variance across the country.

The final regular screening on ABC was a repeat of Revelation of the Daleks part four, on 3 March 1994.

This transmission marked the final screening of Doctor Who on the ABC in the twentieth century, where it had had its home for 32 years...

By late 1985, the ABC had extended its transmission coverage via one of the AUSSAT satellites to reach the island of New Guinea. Doctor Who was therefore seen by viewers in Papua New Guinea and Australia simultaneously from late 1985 onwards.

Refer to the profile of that country for further details.

UKTV was a pay-TV channel, featuring programming from the BBC and Freemantle Media (Thames and Grundy) broadcast on Foxtel (channel 20), OptusTV (channel 26) and Austar (channel 7).

Transmission of Doctor Who commenced on Thursday, 1 August 1996. Episodes aired episodically Monday to Friday (at 11.30pm), with a separate stream of omnibus editions airing Saturdays (at 1.00pm) and Sundays (9.00am).

All the existing serials aired, including the 17 complete William Hartnell stories (albeit not always in strict story order), and six complete Patrick Troughton stories (including the first airing of The Tomb of the Cybermen since its recovery in 1992), then all serials of the third through eighth Doctors.

This run also included for the first time on Australian TV the b/w first episode of Invasion of the Dinosaurs. The Ambassadors of Death however, was shown with a mixture of both colour and b/w episodes.

UKTV also aired a short run of special 40th Anniversary repeats, from 11 October to 23 November 2003, concurrent with the ABC repeats (see below). For this run, at least one serial (in an omnibus format) per Doctor aired: 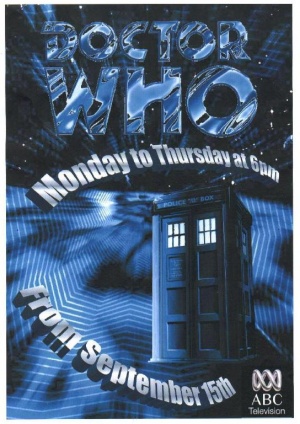 Doctor Who returned to the ABC from Monday, 15 September 2003 for a three-year run of repeats, under the generic banner "Back to the Future".

This run included the first through seventh Doctors only.

However, due to rights issues with the estate of Terry Nation, the following serials (42 episodes) could not be screened:

Also skipped was the TV Movie.

This run commenced a matter of weeks ahead of the BBC's announcement that the series was to be revived. Ironically, by mid-2004, the BBC itself experienced difficulties with securing from Nation's estate the rights to use the Daleks…!

Death to the Daleks aired uncut for the first time.

The final airings of this ABC run were Survival parts two and three, which aired together on Friday, 3 February 2006. 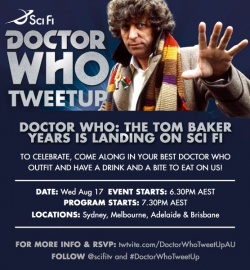 Ad for DOCTOR WHO TWEETUP by Sci-Fi Channel, August 2011

Starting on Wednesday, 17 August 2011, the full run of Tom Baker stories commenced on the Australian Sci-Fi Channel (Channel 125). These aired weeknights at 5.30pm, usually two episodes back to back.

Australia's UKTV celebrated Doctor Who's 50th Anniversary in 2013 with a run of weekly (on Sundays) omnibuses, one Doctor shown each month, from January to November.

Full Transmission History and Airdates coverage is presented on the linked series of pages:

The following online newspaper archives (issues available only to 31 December 1989) have been accessed:

Our TV listings have also been compiled from numerous Australian newspapers, fanzines, TV Guides and other listings publications (far too many to list here), plus the generous contributions of Australian fans listed below. The following online fan sites have also been accessed:

This FORUM at Gallifrey Base also provided lots of useful anecdotal information: 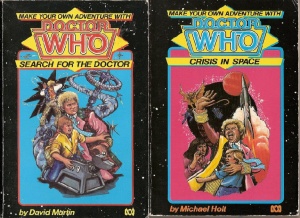 Make Your Own Adventure books, with ABC logo 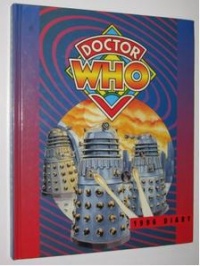 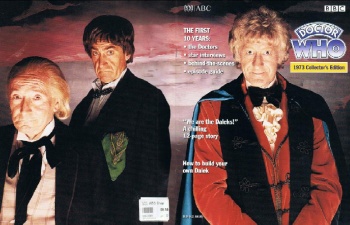 Several items of merchandise unique or specific to Australia have been released over the years. While it is beyond the scope of even BroaDWcast to attempt to catalogue all of these, those of interest include:

Many of the items were sold through The ABC Shop, a chain-store owned and operated by the broadcaster, and selling TV-tie-in material. Although the ABC was a non-commercial broadcaster, television spots for products sold through the ABC Shop were often placed at the end of the credits; Doctor Who merchandise, such as videos and books, was often promoted after the programme. 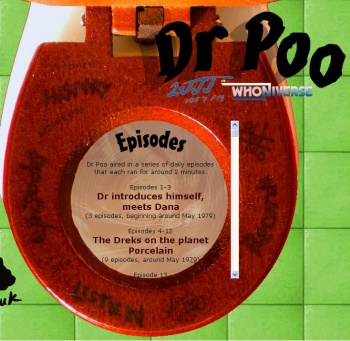 The following are some of the items available on YouTube:

Australia has a very strong fan culture. There are fan clubs in each of the states, some of which have an online presence:

AUSTRALIA IN DOCTOR WHO

Australia has been mentioned directly or indirectly many times; and a number of Australian actors or production personnel have worked on the series: