MILLIONS OF VIEWERS AROUND THE WORLD...

Whenever Doctor Who reached an important milestone in its long history – such as its 20th Anniversary, or temporary cancellation in 1985 - the BBC press machine would often trot out a series of quotes extolling the popularity of Doctor Who, the number of countries the series was being sold to, and how many people worldwide were enjoying the adventures of our favourite Time Lord. But much of this was hyperbole, and far from the truth. In fact, the BBC very carefully worded its press releases to make it seem that Doctor Who was sold to (present tense) X countries, rather than had been sold to (past tense) X countries, making the series seem to be more popular worldwide than it actually was.

The following series of quotations (presented in chronological order) lifted from numerous newspapers and other publications reveal just how far wide of the truth the BBC was with its claims: 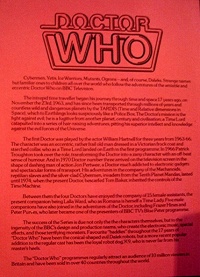 This is the earliest instance of 40 being cited as the figure. 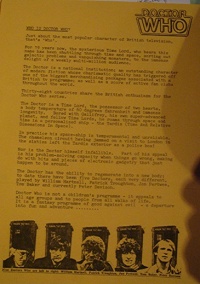 Note the use of present tense "is being televised", which is clearly incorrect.

This is only the second instance where 40 is cited.

In early 1983, the year of Doctor Who's 20th Anniversary, the BBC was claiming that up to 39 countries were watching the series. But by July of that same year, the number of countries worldwide suddenly jumped to 54, as the following series of quotations illustrate. It is likely that someone at the BBC decided it was best to undertake a new tally of the total sales there had been over the years. In fact 54 is not all that wide off the mark – by our count, just over 55 countries had indeed screened some Doctor Who at some point or another between 1964 and 1981 (see Selling Doctor Who):

This magazine is the first BBC-sanctioned publication since The Making of Doctor Who in 1972 to actually name some of the countries.

This New Zealand publication was the first instance of 60 countries and 110 million being cited as the world-wide viewing total. 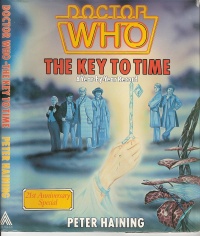 In February 1985 the BBC announced that it was suspending production on Doctor Who for 18 months. The press went almost into melt-down, and began trotting out more facts and figures – probably supplied to them by the BBC itself! – now claiming that a rise by 10 million viewers:

When the 18 month hiatus ended, and Doctor Who returned to our screens, the publicity machine now cited 60 countries as the new default quotation; an increase of six countries from the last count (which is supported to some degree by a mid-1985 sale to several countries in the Caribbean): 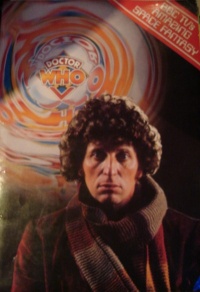 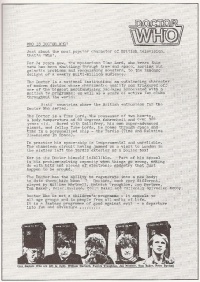 Although Doctor Who had stopped regular production at the end of 1989, this didn't stop soon-to-be-ex-producer John Nathan-Turner and others from trotting out by now well-worn numbers to the press:

The above Sunday Times piece is from a report on Steven Spielberg's apparent "interest" in taking on the series.

Tom is clearly exaggerating here; nowhere else has a figure as high as 93 ever been given before or since!

There we have two conflicting totals – 66 and 60 - in the same publication!

Days after the official announcement that Doctor Who was going back into production, the BBC couldn't but help dust off its old "quotations on file" and cited 60 as the number of countries – a direct quotation from the PanoptiCon brochure:

When all these references are grouped into chronological order like this, a clear pattern emerges.

(1) a massive jump by 15 countries between April and July of the anniversary year; more likely to be the result of a recount of existing 1960s/1970s sales data, rather than being wholly due to 15 new sales that year

(2) a jump from 54 to 60 countries, and viewers by 10 million in the space of a year; the 10 million might be attributed to further sales within just the USA rather than due to the addition of six 'new' countries. (By early 1987, sales to the US had reached over 185 stations.)

As BroaDWcast shows, more than 80 countries have screened some episodes of Doctor Who at some point over the years, but not all the episodes, and certainly not at the same time, as the BBC would sometimes have us believe.

The totals cited in these examples are all accumulative. So it's clear that the BBC was often exaggerating its claims somewhat. Re-read all the quotations above, and substitute present tense statements ("IS watched...", "IS now being…", "IS seen…", etc) with past tense ("WAS watched...", "HAS been…", "WAS seen…", etc) and a more accurate picture is revealed.